Peter Brecht, Economic Commissioner in the District Office for Ravensburg talks about the “No.1 Region Allgäu-Upper Swabia”

For more than 20 years, Peter Brecht has been the Economic Commissioner of the county Ravensburg and has held this function in addition to the business development company of the county as contact partner, mediator and guide for companies situated in the county, who have an issue with the district office. He has already experienced a lot as part of his job. He remembers in particular a founder of a new business, for example, who wanted to take “his” subsidy money right away during the first contact meeting...
“In my job I am always fascinated by how many market and technology leaders – national, European level and in world markets - are situated in the four-country region around Lake Constance”, raves Peter Brecht.
And he also knows the reason for this development: “The Upper Swabian tinkering spirit and traditionally aware companies have always formed the basis for successful development of renowned market and technology leaders here in the four-country region.
In order to make this economic potential more visible trans-regionally, our regional Economic and Innovation Promotion company (WiR) started several years ago to promote the obvious strengths of the economic area in an own location campaign under the slogan “The No. 1 Region Allgäu-Upper Swabia”.
The special part about this: 12 companies from county Ravensburg, which belong to the German part of the four-country region, all German, European or even worldwide market or technology leaders, participated in the common trans-regional marketing of the strong economic area.
Using posters, brochures, lorry and bus inscriptions as well in the internet, advertising has been made since then for the No. 1 Region and their companies. With the attractive campaign, the diverse top performances of the participating companies are introduced – all of the international active companies from the construction industry, recycling technology, the leisure, household and games industry, the laboratory areas up to the specialists for aerospace technology.
“This clearly shows that here in the four-country region we are well positioned and in addition to the great cultural landscape and a high recreational value also have much to offer economically”. 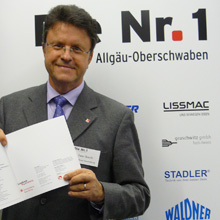 Has lived on Lake Constance since For 61 years

Favourite place on Lake Constance: The Waldburg… a boundless view of one of the best preserved fortresses in Southern Germany

Shopping Tip: The historic Old Town of Wangen in Allgäu is always worth a visit.

„I work as a cross-border commuter and pass on the practical experience gained in my job as a EURES Advisor to others.“
Susanne Müller-Koberstein, 44

„“Children are naturally inquisitive and able to learn.”“
Kathrin Novy-Rankl, 32