The strength of weak networks

1 lake, 4 nations, 10 States and Cantons, 1000 opportunities. This is the starting situation for the international Lake Constance region – a scenically homogenous region, in which people with the same language and with the same cultural roots live together, where Lake Constance and the Rhine have formed a natural border from time immemorial, which both separates and unites at the same time. In this “contact zone”, the international Lake Constance region has been established as a cross-border trading area for quite some time.
This trading area is demarcated by the area of the International Lake Constance Conference (IBK), consisting of parts of the states Baden-Wuerttemberg and Bavaria, the Land Vorarlberg, the Cantons of St. Gallen, Thurgau, Schaffhausen, Zürich, Appenzell Innerrhoden and Appenzell Ausserrhoden, as well as the Prinipality of Liechtenstein. The IBK is the platform where governments and administrations of the countries and cantons around the lake can exchange information according to the motto: “Boundless, creative, networked”. Particular significance is given to the “Mission statement of the IBK for the Lake Constance area” in which the countries and the cantons define common goals. At the same time, the mission statement points out that a successful development can only mutually succeed with the involvement of different networks.
The collaboration is extremely diverse: from loose networks of stakeholders and goal-oriented coalitions to international associations or cross-national commissions and administrative communities. This makes sense in a region, in which – as the local residents say – there is “viel Haag and wenig Garten”, i.e. many fences and little garden.
As Berlin, Bern and Vienna appear to be far away, many things are regulated in an “informal way”. It thus happens that the borders, sometimes even an EU external border, may be forgotten. Whenever it is possible, people on Lake Constance know how to help themselves. For the benefit of the almost four million residents and the impressive quality of life.
In general, the cross-border collaboration on Lake Constance is characterised by the fact that it is based on cooperation and networks rather than formal and legal principles. The IBK also operates without a formal legal basis, somewhat like the form of a treaty.
The tasks of the IBK administrative office begins with maintaining the networks and cooperations. Klaus-Dieter Schnell and his team are the official contact points for cross-border questions. Anyone who wants to move something cross-border can inform himself or be advised at the IBK about possible cooperation partners or subsidies.
The 49-year old Upper Swabian was enticed to Lake Constance for his degree course at the University of Constance. Further stations in his vita were the ETH Zürich and the University of St. Gallen, which also took him to the Swiss part of the region. Privately, the IBK General Manager also likes the “exciting variety” on Lake Constance, the Alemannic dialect and the valued and pragmatic inhabitants and especially their occasional rebellious side. 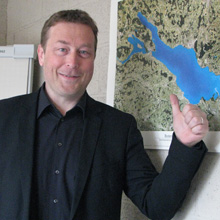 Profession: Head of the administrative branch of the International Lake Constance Conference (IBK)

Has lived on Lake Constance since 27 years

Learning in the four-country region

All universities of the region