The business manager behind the world’s best hand blender

Which kitchen appliances are able to purée, mix, chop, knead yeast dough, whip, froth up, bind, emulsify, grind up, grate, slice, rasp and make short crust pastry? Exactly, only one, - the ESGE® Magic Wand and/or bamix® hand blender from Mettlen in Canton Thurgau. Since 2002, Erich Eigenmann, is jointly responsible for this 60-year old success story as co-owner and CEO of ESGE AG bamix® of Switzerland.
In 1950, the bamix®, a word combination of “battre et mixer”, was invented by Roger Perrinjaquet and was distributed from 1954 onwards in German speaking countries. Over this entire period, the bamix® and/or ESGE® Magic Wand has kept its simple design – which, in the meantime, is one of the 50 design classics of the 20th century. Just the range of applications has been expanded with ingenious accessories such as the processor or the SliceSy®.
“I am fascinated, how the bamix® continues to enthuse both private and professional cooks”, said Erich Eigenmann. This customer satisfaction is not without reason: Quality is the centre of our focus - and this encompasses all areas. All original parts are made in Switzerland and the suppliers are longstanding business partners – the oldest has been with us for 40 years. Longstanding partnerships also exist to the state representations. In the production in Mettlen TG, the various production steps are carried out by different employees in an alternating pattern, who have been with the company on average 14 years. Before distribution, each bamix® or ESGE® Magic Wand also undergoes a number of test runs over a period lasting 5 to 10 minutes at all levels. “Some dealers also grant a lifelong product guarantee”, added Erich Eigenmann.
Erich Eigenmann is convinced of the role of the niche player, having a one-product strategy and Switzerland as a location: “The challenge of the coming years will be to develop new markets profitably. Our goal, however, is not to grow at just any price. On the contrary, we want to exceed the expectations of our customers.” The proof that the bamix® and/or ESGE® Magic Wand also convinces in the features performance, speed, flexibility, handling and cleaning ability is demonstrated by its use in diverse cooking shows around the world. 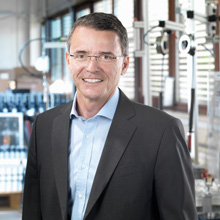 Leisure Tip: Summer and winter activities around the Chäserrugg

Sports Tip: Hiking on the Chrüzegg

„Anyone who wants to move something cross-border can inform himself or be advised at the IBK about possible cooperation partners or subsidies.“
Klaus-Dieter Schnell, 49

„Know-how is the one thing - knowing who is the other! For this reason, I mediate research cooperations – also beyond borders – and make the four-country region around Lake Constance even more successful.“
Team Knowledge Transfer

The economic and investment location of the four-country region around Lake Constance.

More and more start-ups and enterprises are combining the advantages of this beautiful tourist region with its strong business power. What they already know: No other business region in Europe offers such ideal living- and working conditions. The four-country region Bodensee has been distinguished in comparisons with other business regions.

According to the recently published study by futurologist and trend researcher Matthias Horx, the Four-country region Bodensee is a uniquely “thriving business-, tourist- and residential region” and considered one of the “hot spots” in Europe.

Further Information about the economy